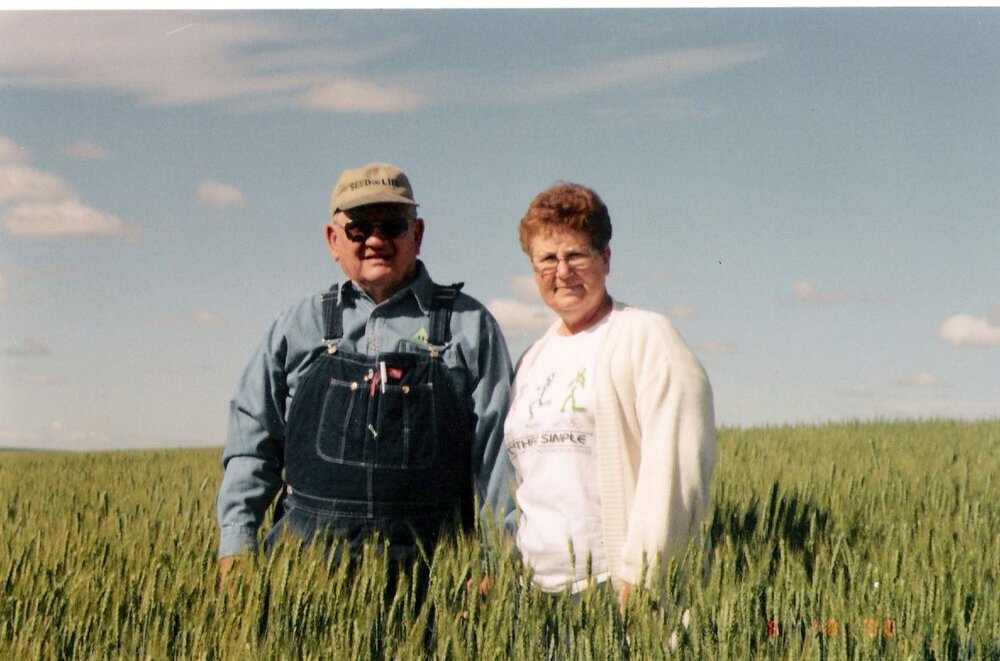 Obituary of Patricia A Fode

Please share a memory of Patricia to include in a keepsake book for family and friends.
View Tribute Book
Patricia Ann Fode (Smith), a lifelong member of the Lind-Ritzville community who was a volunteer and a loving mother and grandmother, died Thursday, Sept. 22, 2022 at Providence Sacred Heart Medical Center in Spokane, Wash. She was 83. Pat enjoyed a long, rich life anchored by two pillars: her family and Christianity. A career housewife, she built a loving home with an inviting kitchen that never lacked for fresh-baked pies and the inviting smells of rustic dinners. While her beloved husband of 54 years, Ruben, worked the wheat fields, she raised their two children and was active at Zion Philadelphia UCC in Ritzville. She was born on Dec. 1, 1938 in Spokane to Lorraine and Bernie Smith, Pat was one of three kids, and she grew up in Sprague. When her parents divorced before her senior year she moved to Ritzville, where she graduated high school. Pat and Ruben met and after a short courtship were married on Sept. 24, 1960. The couple settled on Ruben’s family’s farm in Eastern Washington, 7 miles outside of Lind. There they put down roots and made a humble life with their children and in later years, their four grandchildren. When Ruben retired from farming the two filled their time cheering for their beloved Washington State Cougars and the Seattle Mariners. They remained on the farm until 2014 and moved to Park Place in Spokane Valley. Pat’s passions included volunteering at her church. The community it provided was incredibly meaningful to her, and she was known for her love and generosity. She wrote poems for the church newsletter and occasionally gave the sermon. Two years before Ruben passed, Pat became a published author in 2012. Her book of poems “Let the Spirit Talk” was influenced by her life in the church and her family. Pat was preceded in death by her parents, her husband Ruben and her brother Kent Smith. Survivors include her sister Marcy Dunlap; daughter and son-in-law Bonnie and Randy Holce and son and daughter-in-law David and Christine Fode. Also surviving her are four grandchildren and spouses, Benjamin Schorzman and Elissa Gavette, Byron Schorzman, Michael Fode and Matthew Fode; one great-grandchild, Lillian Schorzman; and several nieces and nephews. Pat’s family would like to thank the staff at Park Place for the loving care over the past eight years. In lieu of flowers, the family requests you make donations to XXXXX. There will be a memorial service at 11:00 a.m on October 15, 2022 at Zion Philadelphia UCC in Ritzville, WA. Inurnment will be at Ritzville Memorial Cemetery. Danekas Funeral Home and Crematory-Ritzville is entrusted with arrangements.
To plant a beautiful memorial tree in memory of Patricia Fode, please visit our Tree Store

Look inside to read what others have shared
Family and friends are coming together online to create a special keepsake. Every memory left on the online obituary will be automatically included in this book.
View Tribute Book
Services for Patricia Fode
There are no events scheduled. You can still show your support by planting a tree in memory of Patricia Fode.
Plant a tree in memory of Patricia

Share Your Memory of
Patricia
Upload Your Memory View All Memories
Be the first to upload a memory!
Share A Memory
Plant a Tree