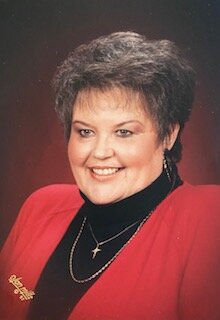 JoLane Mary Danielson passed away on Friday, June 24, 2022, at the age of 80. She was born on February 8, 1942, in Wallace, ID to Joe and Alice Bewick. In 1959, she was Miss Sprague and Lincoln County Queen. She graduated from Sprague High School in 1960. She attended Yakima Valley Junior College for a year and a half, and then worked as a dental assistant for three years. JoLane was married to Gerald Slaaen in 1962 and they had two children, JeriLane and Jeff. Gerald passed away in March of 1970. After his death, JoLane worked for the Assessors Office at the Spokane County Court House as a Secretary of Legal Assessment of Housing. On June 14, 1974 JoLane married Kenneth Danielson and moved to Waterville, WA with her two children. In the fall of 1979, the family moved to Sprague, WA. JoLane was involved in many outside activities. She was the Mother Advisor for the Order of Rainbow of Girls for three years. She served on the church council, sang in choir and taught arts and crafts during Vacation Bible School at St. John’s Lutheran Church for many years. In 1986 she started her own business, JoLane’s, selling hand painted and decorated clothing. This business lasted until 2002. On June 14, 2022, JoLane and Ken celebrated their 48th wedding anniversary. JoLane was a beloved wife, mother and grandmother. JoLane loved being with her family and spending time with the her grandkids. She made many trips to California with either Ken or Zachary. Words cannot describe how much she will be missed. JoLane is preceded in death by her parents Joseph and Alice Bewick, her 1st husband Gerald Slaaen and her brother Robert Bewick. She is survived by her husband Kenneth Danielson, daughter JeriLane (Theron) Wing, son Jeffrey Slaaen, three grandsons Zachary (Heather) Slaaen, Taylor (Helen) Wing, Nicholas (Sara) Wing, one great granddaughter Tatum Slaaen with two more great grandchildren on the way. In lieu of flowers, memorials may be sent to St. John’s Lutheran Church in Sprague, WA. Services will be held Saturday, July 2nd at 11:00am at St. John’s Lutheran Church in Sprague, WA.
To plant a beautiful memorial tree in memory of JoLane Danielson, please visit our Tree Store
Saturday
2
July

Share Your Memory of
JoLane
Upload Your Memory View All Memories
Be the first to upload a memory!
Share A Memory
Plant a Tree