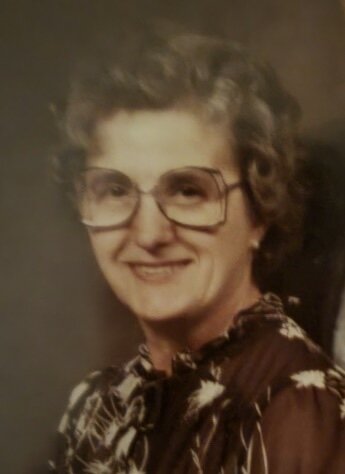 Martha “Toni” Schrenk, aged 99, passed away of natural causes on August 14, 2021, at her home in Moses Lake, WA. Martha Kaiser was born on August 1, 1922, in the Schular district near Calgary, Alberta, Canada. She was the sixth of 12 children born to George and Catherine Schafer Kaiser: George, Katherine, Jack, William, John, Martha “Toni”, Herbert, Caroline, Edwin, Albert Rose, and Margaret. Three of her siblings, Jack, John and Edwin, died very young. All the children went by nicknames and “Toni” is how we always have known this dear lady. Toni worked in a drycleaner establishment in Calgary for a few years after high school. One summer she and her cousin took a long vacation and rode the bus to Colfax, WA, to see her cousin’s uncle, Karl Schrenk. They stayed for several weeks but accidentally missed their bus home because they overslept. That very day, Ted Schrenk and his sister happened to visit their (same) Uncle Karl when they came to town. Ted was a handsome WWII veteran and returned POW who lived in Lind. He had been captured at the Battle of the Bulge in December 1944, and was released on Easter Sunday 1945. Of course, Ted met those two young women visiting from Canada at Karl’s house that day and that’s where Ted and Toni’s love story began. After the girls got back home to Canada, Ted and Toni exchanged many letters and he was also able to visit her and meet her family. Well, as soon as Ted got a coveted job as a U.S. Postal Service mail carrier in Lind, WA, he drove straight up to Calgary and asked Toni to become his bride, knowing he would now be able to provide a good living for his prospective wife and any children. Toni married Theodore Ronald "Ted" Schrenk on September 1, 1952, and they made their home in Lind, WA. Daughter Karen joined the family in 1953 and son Roy in 1956. She became a U.S. citizen in 1956 and got her driver’s license about 1963. Toni was a wonderful cook and homemaker. Toni mostly stayed home to care for her own children until they went to school. She took in ironing, babysat children of working families, and later was a playground supervisor at the elementary school across the street and served also served lunches at the high school. Her children remember that Toni was always cooking and baking and welcomed people to visit and eat at their home. When the tired parents of the children she babysat came to pick up their kids after their long workdays, she would usually invite them to sit down and eat supper with her family before they went on home. Toni is survived by her children, Karen Schrenk Dubberly (Mike) of Decatur, Texas, and Roy Schrenk of Moses Lake; grandsons, Vance Dubberly of Pasadena, CA, and Rob and Allen Schrenk of Moses Lake; great-granddaughter Emma Schrenk; sister, Margaret Kaiser Simpson, Edmonton, Alberta; and countless loving nieces and nephews. She was preceded in death by her husband Ted; granddaughter, Michelle Dubberly; her parents, and all her other siblings. A special thank you from the family to Toni’s grandsons Allen and Rob Schrenk, who lovingly cared for Toni in her home for the past 15 years. There will be a graveside service at the Lind Cemetery at 11:00 a.m. on August 27, 2021. Arrangements are being handled by Danekas Funeral Home in Ritzville: danekasfh.com
To plant a beautiful memorial tree in memory of Martha Schrenk, please visit our Tree Store
Friday
27
August

Share Your Memory of
Martha
Upload Your Memory View All Memories
Be the first to upload a memory!
Share A Memory
Plant a Tree