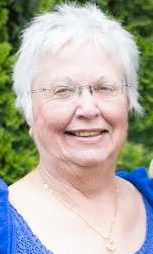 Sherryl Sielaff Evans passed peacefully on March 27, 2020, after a short illness. Sherryl was born in Ritzville, WA on November 10, 1940 to Lester and June Sielaff. She went to Ritzville Schools and graduated in 1959 and was awarded the creative arts award. She attended Eastern Washington College studying elementary education and art. In her Jr. Year of college, she married Vince Evans, also of Ritzville. They made their home in Washtucna and Ritzville. They farmed wheat and Sherryl would prepare wonderful lunches for the harvest crew that she served out of the back of her station wagon. They raised their three children Colleen, Eric and Aimee. Sherryl was a very talented artist mainly concentrating on western art painting mules and horses using oils, inks and watercolors. She belonged to the national artist group, Women Artist of the West showing her work all over the western United States. She was also an editor of the WAOA’s quarterly bulletin, West Wind. Her work is on display in many homes all over the world. Sherryl and husband Vince constructed three large metal sculptures that are on display in Ritzville. She did the Pioneer Woman with Child, Mr. Ritz and Shontz Schuler, her great-grandfather who was the contractor who built the Carnegie Library in Ritzville. She also did many other small sculptures and artwork. Sherryl always had a camera in hand taking pictures of family, flowers and of course mules and horses to draw later. She was also an accomplished seamstress and was a past member of Beta Sigma Phi. Sherryl was a woman of great faith and sang in the choir at Emanuel Lutheran Church for many years and she loved reading. Sherryl started and then organized the Ritzville Horse Riding Clinic at the Ritzville Rodeo Grounds annually for many years. Sherryl is survived by her husband of 58 years, Vince, her children Colleen Ruzicka and husband Mike, Eric Evans and his partner Fawn Green and Aimee Schell and husband Colby. She is also survived by her grandchildren Kelsey Knodel and husband Nate, Cort Ruzicka and wife Jenna, David, William, Christopher Green and wife Sarah & kids Wade, Sage and Emmitt and Kate and Rachel Schell. She is also survived by her sister Marilyn Sielaff, nephews Mitch Sielaff and Adam Miller and wife Angela, nieces Sarah Sielaff and partner Carl Walker, Michele Larson and husband Bob, Kimberly Yaeger and husband Scott and Melissa Rainer and husband Jeremiah along with her husband Vince’s sisters and brother and their families and many great-nieces and nephews. Sherryl was preceded in death by her parents Lester and June Sielaff and brother, Steve Sielaff. Memorials may be made to Emanuel Lutheran Church, Ritzville Alumni Association or Hospice House of Spokane or a charity of your choosing. There will be a public gathering for a Celebration of Life at a later date. There will be a public visitation on Tuesday April 7th, 2020 from 11:00 a.m. to 5:00 p.m. at Danekas Funeral Home in Ritzville. To leave online condolences for the Evans family and to follow updates on a public gathering please visit our website at www.danekasfh.com
To plant a beautiful memorial tree in memory of Sherryl Evans, please visit our Tree Store
Tuesday
7
April

Check our website for updates on a Celebration of life for Sherryl once the restrictions have been lifted.

Share Your Memory of
Sherryl
Upload Your Memory View All Memories
Be the first to upload a memory!
Share A Memory
Plant a Tree