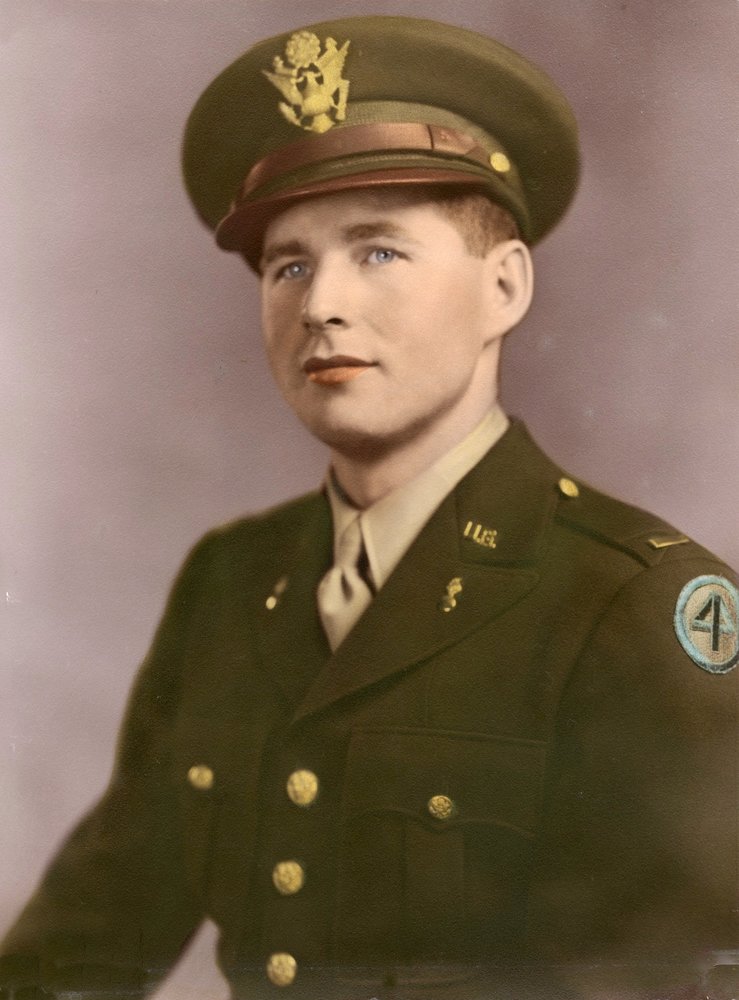 Adolph G. Grams passed away Tuesday, March 10, 2020, at 101 years of age at Cottage in the Meadow in Yakima, WA. Adolph was born on February 24, 1919 in Ralston, Washington, to German immigrant parents Reinhold and Mary Grams. He attended elementary school in Ralston and one semester at Harrington High School, graduating from Ritzville High School in 1938. After a stint working at the Ritzville hardware store and farming, Adolph joined the United States Armed Forces in July of 1943. Following basic training at Aberdeen Proving Ground in Maryland, Adolph graduated from Officer Candidate School and graduated as a commissioned 2nd Lieutenant. To his delight, Adolph discovered that Winifred Jean Williams, a WAAC he had dated back home in Washington State, was serving as company clerk at Edgewood Arsenal, also in Maryland. They married at Fort Lewis in October of 1943 and enjoyed 64 years of marriage together. Subsequently, Adolph was deployed to Europe, traveling with his 44th Infantry Division on the fastest surface ship afloat, the Queen Elizabeth. After debarking at Gourack, Scotland, the Division moved by train to southern England and ultimately landed on Omaha Beach. While stationed in the Alsace Lorraine area, Adolph received a telegram announcing the birth of his son, David Lee. Because Adolph grew up in an immigrant family where English was not spoken at home, he was bilingual in German and English. His immigrant language heritage became useful to our Country, and he was chosen to be the translator and liaison at the disarmament of the 19th German Mountain Army near Reutte, Austria in May of 1945. Returning to New York harbor on the Queen Elizabeth with 17,000 other soldiers for a 30- day home leave, Adolph was preparing for deployment to the Pacific theater when the war ended. Adolph opted to return to farming, serving as manager of his uncle’s 2000 acre wheat farm near Harrington, Washington. Adolph’s daughter Cynthia Ann was born in Spokane in 1947. Teen nephews Roger and Richard Williams also joined Adolph and Jean’s family for several years. In 1954, Adolph became farm manager of Upper Columbia Academy, a coed Seventh-day Adventist boarding school near Spangle, Washington. The family moved to Michigan several years later, where Adolph graduated from Andrews University with a science major in 1961. Returning to Washington, Adolph taught biology and history at Columbia Academy, another Adventist boarding school near Battle Ground, Washington, where he also served as dean of boys. From 1967-1984, Adolph was Dean of Men at Pacific Union College in northern California. During those years, he earned his Master’s in education and counseling at Oregon State University. He was a great mentor to hundreds of college students as well as a systematic and capable administrator. In retirement, Adolph remained active in leadership in the Seventh-day Adventist church, as well as playing his harmonica and German accordion at many venues. He particularly enjoyed bringing joy and humor to the residents of retirement homes and nursing facilities. Adolph enjoyed spending time with his children, grandchildren and great-grandchildren. They remember him fondly as a man who lived his faith and loved his family. He is survived by his son, David (Cheryl) Grams of Rapidan, VA, his daughter, Cynthia (Ulrich)Tutsch of Yakima, WA, his sisters Rita (John, dec.) Imler of Tacoma, WA and Juanita(Gil) Sharp of Las Vegas, NV, six grandchildren, Kevin Grams of Appleton, MN, Lynn (Sam) Tooley of Tacoma, WA, Lori Grams of Appleton, MN, Elisabeth(Greg Nelson) Tutsch of Yakima, WA, Karl (Alycia) Tutsch of Portland, Oregon, Mikki (Joni) Tutsch of Onalaska, WA, six great-grandchildren, as well as cousins, nieces and nephews.
To plant a beautiful memorial tree in memory of Adolph Grams, please visit our Tree Store

Share Your Memory of
Adolph
Upload Your Memory View All Memories
Be the first to upload a memory!
Share A Memory
Plant a Tree