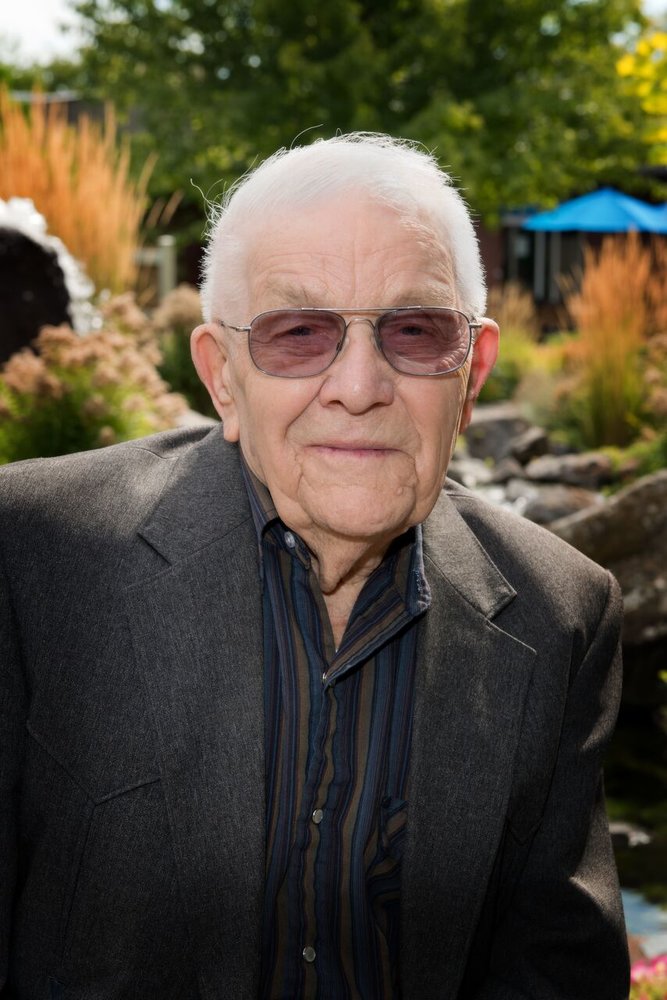 Obituary of Chester E. A. Templin

Chester “Chet” Ernest Alfred Templin passed away at 100 years old on February 2, 2020 after a battle with pneumonia in Spokane, WA. Chet was born to German immigrant parents, Elsie “Ella” (Wellsandt) and Ernest Templin, on December 11, 1919 in Ralston, WA. He grew up amongst the vast wheat fields that called on him to become a farmer. Chet was curious, smart, and a good speaker, making friends wherever he went. He especially enjoyed the Ag program and graduated from Ritzville High School in 1938. He farmed with his father near Tokio, WA until he could borrow money to purchase the farm himself. Chet was deferred as farm exempt from World War II. He worked part-time with the ASCS measuring allotments for farms in Adams County while continuing to farm. He married Gladys Rose (Regan) in 1945, and they welcomed their daughter, Garnet, in 1947 and their son, Garrett, in 1950. Chet was always a forward thinker. At Gladys’s urging, he was among the first farmers in Adams and Lincoln counties to drill wells for irrigation and grow green crops like alfalfa in 1948, and later blue grass seed. The farm now sits as a lovely oasis in the middle of the dry, dusty, rolling hills. With farming always a challenge, Chet did extra jobs to support his family. He sold Purina feed, and sold and installed Stormor grain storage tanks and later Scafco grain bins—an activity he did into his 90s. He was a great mentor to the young men in his crews and became a lifelong friend to the farmers he helped. Over 1000 of his grain storage bins now pepper the landscape throughout Adams, Lincoln, Grant, Spokane, and Whitman counties. Chet achieved much in his 100 years, from being the 1st Ritzville FFA president, a 4-H Livestock Club leader, and a member and master of the Crab Creek Grange, to helping establish the Ritzville Conservation District. He was a lifelong member of Emanuel Lutheran Church in Ritzville, graciously serving in multiple roles over the years. After Gladys’s early death, Chet married Juanita (Perkins) Stromberger in 1979. With the same values and strong faith in God, they were happily married for over 40 years until Chet’s death. They enjoyed time with their beloved children, grandchildren, and great grandchildren. They experienced many adventures together, including visits to Australia, Europe, and China. Recently they faced their greatest challenges together after ‘Nita lost most of her eyesight, Chet’s leg was amputated, and they left the farm for Riverview in Spokane. Despite this, their love and support for one another, their family, and their community never wavered. Chet was preceded in death by his parents, wife Gladys, brothers Delbert and Robert, and infant sister. He is survived by his wife Juanita; daughter Garnet Templin-Imel (Kenneth Imel) of Camano Island; son Garrett Templin (Carol) of Ritzville; step-daughter Julie Eller (Michael) of Kennewick; grandson Reid Templin (Angela) of Lake Forest Park; grandson Jared Templin (Linsey) of Kennewick; granddaughter Reagan Templin (Keith Babinec) of Redmond; granddaughter Patricia Rutledge (Daniel Wadleigh) of Spokane; granddaughter Lisa Imel of Bellingham; grandson William Eller (Sara) of Seattle; grandson Christopher Eller of Seattle; and eight great grandchildren. Visitation will be Friday, February 7, 2020 from 9am-5pm at Danekas Funeral Home in Ritzville. An internment will be held at the Ritzville Lutheran Cemetery on Saturday, February 8, 2020 at 1pm with a Memorial Service following at Emanuel Lutheran Church at 1:30pm. Memorial donations may be made to Emanuel Lutheran Church (206 S Division Street Ritzville, WA 99169) or a charity of your choice in loving memory of Chester Templin. To leave online condolences for the Templin family please visit our website at www.danekasfh.com. The family would also like to give thanks to Harold Fleiger for the wonderful photos.
To plant a beautiful memorial tree in memory of Chester Templin, please visit our Tree Store
Friday
7
February

Share Your Memory of
Chester
Upload Your Memory View All Memories
Be the first to upload a memory!
Share A Memory
Plant a Tree