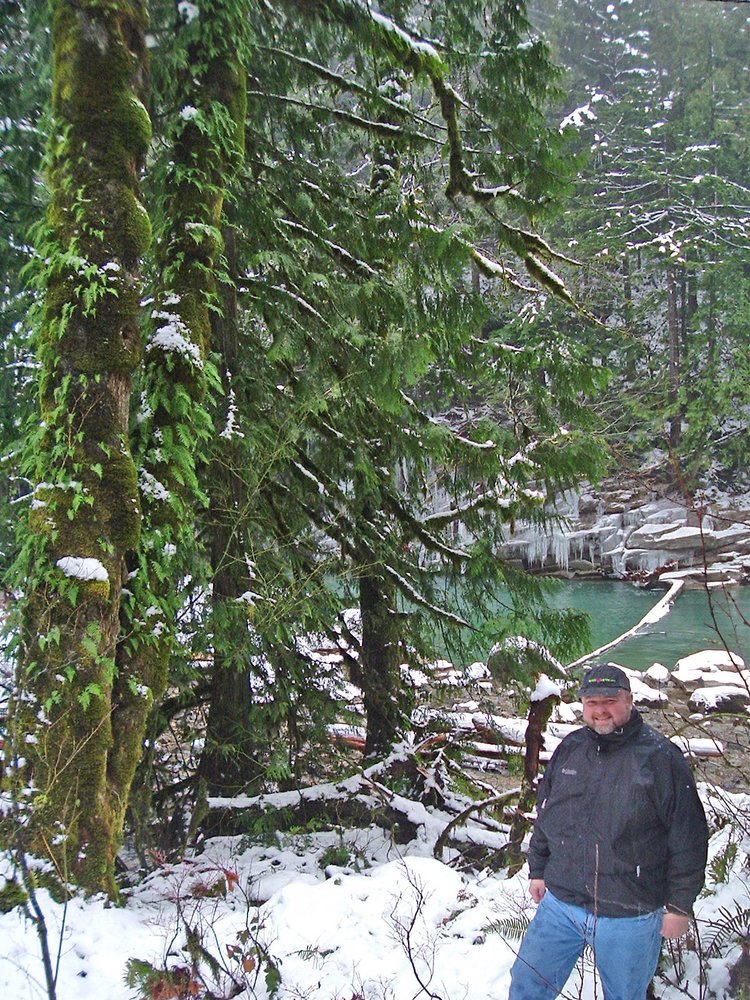 Terry's parents met on Whidbey Island. Herman "Gene" was raised in Florida, and was serving at NAS Whidbey Island near Oak Harbor when he met Polly Woods-Smith, a college student with a passion for horses. They married on October 31st, 1959 just before Gene was deployed to Alaska. Terry was born at the Oak Knoll Naval Base hospital in Oakland in 1962.  As a military family, they lived in several places. While Gene was deployed to Viet Nam, Polly stayed with family on Whidbey Island, but together they lived in Holy Loch, Scotland, Corpus Christie, Texas and the Panama Canal Zone.

When Terry was 9, Gene left the Navy  and they moved to Jacksonville Florida where Gene, his father and brother operated the Yearty Pest Control business for many years. Terry joined Boy Scouts Troup 252, led by scout master Bill Baker, and eventually achieved the rank of Eagle Scout. Gene was also active in scouts and sponsored 2 other boys. He enjoyed camping with other scouts, some of whom have become lifelong friends, with stories of wet tents, burnt pancakes and raw bacon for breakfast. He joined JROTC, and graduated from Ed White High School in 1980. He joined the US Army and served for 2 years, with rank of Medical Care Specialist, He was honorably discharged while living in the Tacoma area, serving at Fort Lewis, later Joint Base Lewis-McChord. He had fallen in love with the Northwest, and remained in the Tacoma area as an EMT. He decided to pursue nursing, and moved back to Jacksonville and enrolled in Florida Junior College using his military education benefits, and earned is Associate Degree in Nursing in 1985. He worked in many roles in his nursing career, including trauma, emergency room, transplant, home health and home infusion. In the Summer of 1990, while working at Baptist Medical Center ER he met Barbara Huse, a traveling nurse from Michigan, and romance blossomed. After becoming engaged, they took travel assignments in Lexington, Kentucky and later married in August 1991. Their wedding trip was driving from Toledo, Ohio to Washington to take joint nursing assignments at St. Francis Hospital in Federal Way. Along the way, their car broke down in Billings, Montana. While waiting for parts to arrive, they enjoyed the local rodeo and drove their loaner car around the area enjoying the beauty of the land bordering Yellowstone National Park. Barb extended her contract with SFH, but Terry enjoyed being a free agent, and worked as an agency nurse in the Seattle area. They visited Whidbey Island, and became reacquainted with family including his Uncle Sam Woods-Smith. In the summer of1992, the couple moved to back to Jacksonville, with eventual plan for Terry to return to school and achieve his Bachelors Degree in Nursing. They both worked in their nursing careers and in 1997 were blessed with a daughter, Alexia. Family was always important, and they spent most Sundays with Gene and Polly's. Otherwise they enjoyed camping or traveling to Orlando to visit his best friend Marty Lambert. He was loyal to his friends, and stayed in touch with high school, college and scout friends. Terry graduated from the University of North Florida in 1998 with his Bachelor's Degree in Nursing. After Gene's death in 2003, the families merged and had a new home built on the west side of town. He joined the local Disaster Medical Assistance Team (DMAT), which was later absorbed by FEMA. For about 5 years he was available for deployment after natural disasters, mainly in the southeast. In 2004, Terry decided to pursue an advanced degree, and enrolled in an RN to PA bridge program through the University of North Dakota in Grand Forks. In 2006 he graduated with his Masters degree in Physician Assistant Studies (M-PAS). Barbara later enrolled in the same program, graduating in 2008. He continued to work in the Jacksonville area as a Physician Assistant, in the Internal Medicine field in both hospital and clinic. He continued to dream of moving back to the Northwest, and after Alexia graduated from high school in 2015, the family (including Polly and Alexia) moved to Wenatchee, Washington. Terry and Barb worked for the Wenatchee Valley Clinic and Hospital; Barb in Cardiology and Terry as a Hospitalist (an Internal medicine provider that only takes care of hospitalized folks). After about 6 months he left WVCH, and worked as an independent contractor at a local hospital in the Spokane Valley area. This was a great situation, as he really enjoyed his colleagues and was able to work blocks of time then be home for a stretch, and could stay in touch with Alexia, who had fledged and was living in Spokane attending the Junior College's esteemed Culinary Arts program.

Terry enjoyed many hobbies and passions: target shooting, photography, cooking, computers and electronics, camping, traveling. He had an inquiring mind and was an avid reader, quickly adopting a Kindle to have multiple books in progress at once. He enjoyed arguing about politics and cared about social justice. He was a good man, great father and wonderful husband. He is sorely missed by his wife Barbara, daughter Alexia and mother Polly, as well as a multitude of friends. Our lives are richer for having him with us for only 56 years.

Share Your Memory of
Terrence
Upload Your Memory View All Memories
Be the first to upload a memory!
Share A Memory
Plant a Tree