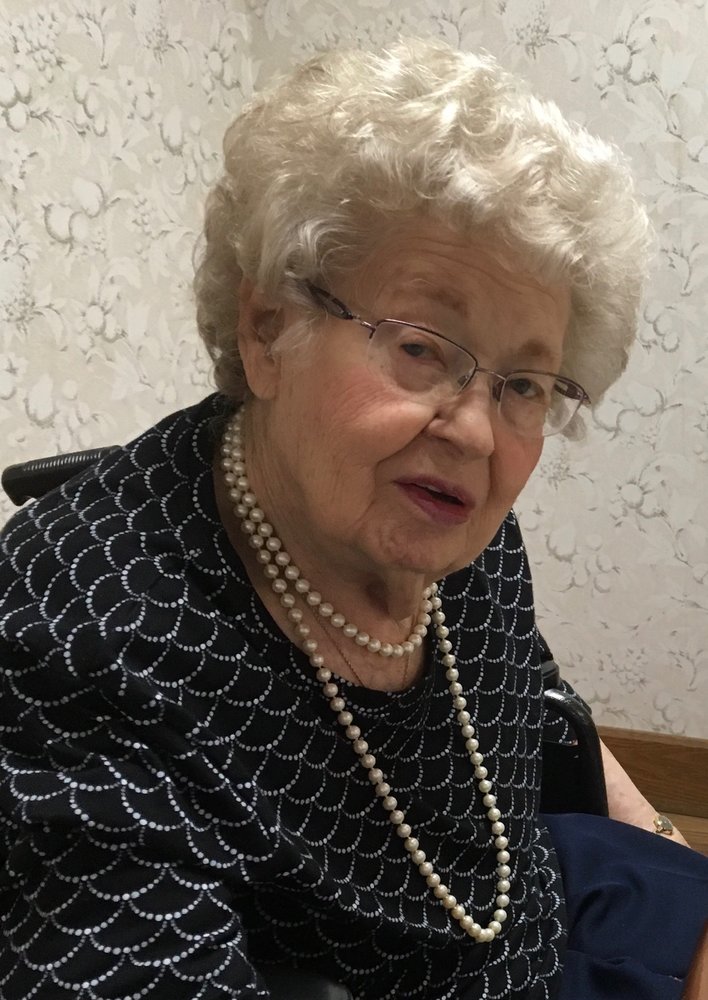 Born: December 28, 1922 in Ritzville, WA.  Died: September 9, 2017 in Kennewick, WA A WWII tour of duty brought the love of her life, Orvis D. (Dan) Kutschkau, Sr., to Ritzville, WA, and the Harder Bombing Range.  Dan and Elaine were married on November 1, 1942.  Their nearly 66 years of wedded bliss has been a role model for their kids, & grandkids.  Elaine was a “Grand Lady” who loved chocolate, made famous favorite recipes of clam dip, brownies, Wackie cake, German Chocolate cake; and had the ability to make friends of strangers with her quick wit and smile.  She also enjoyed shopping - or as she put it "just to look, pinch and a feel."After Dan’s Honorable Discharge from the Army Air Force on October 2, 1945, they settled in Ritzville with their young son, Orvis D. (Dan) Kutschkau, Jr.  Soon, their daughter, Lorna Marie, was born.  They owned and operated several businesses in Ritzville over the next 40 years, including “Danny’s Texaco Stations,” the “Brunswick” tavern & pool hall, “S & K Motors,” and their favorite, “Big Bend Bowl.”  The Kutschkau family attended Zion Congregational Church while living in Ritzville.  Dan and Elaine enjoyed many weekends and summers at their Diamond Lake cabin, along with their children, grandchildren, and friends.  Dan sold Real Estate in Spokane to ease into retirement.  Dan and Elaine finally made the transition to full retirement when they relocated to the Kennewick Village at Canyon Lakes in 1998.  Dan passed away in 2008, and Elaine continued to live in Canyon Lakes until a broken hip necessitated her move into the Royal Columbian Retirement Home in 2015. Elaine is survived by their children, grandchildren, and great grandchildren: Daughter Lorna & Bill Moffett (Edmonds, WA); grandchildren and great grandchildren Kelly & Jeff Keller, along with son Jack and daughter Quin; Megan & Jeff Gerard, along with daughter Akayla and sons Jordan and Mitchel. (Edmonds, WA); Son Dan Jr. & Elaine M. Kutschkau (Kennewick, WA); grandchildren and great grandchildren Kim & Ben Allen, along with sons Zach & Elijah (Kennewick, WA); Jody & Chris Haun along with son Erik and daughter Sydney (Boise, ID); and Dean & Katrina Kutschkau, along with son Landon and daughter Madison (Kennewick, WA).  Elaine was preceded in death by her husband Dan; parents, Albert and Elsie Ott; sister, Mildred Danekas; and brothers, Arthur Ott and Robert A. Ott. Elaine made many great friends throughout her life, beginning with Ritzville High School, business and community involvement, church, bowling, Diamond Lake, Canyon Lakes, Trios and Kadlec Hospitals, Royal Columbian Retirement Home, and Tri-Cities Chaplaincy Hospice House. A Celebration of Life Memorial service will be on Saturday, September 16th at 1:00 pm at the Zion Philadelphia-Congregational United Church of Christ 301 E Broadway Ave. Ritzville, WA 99169 Presided by Rev. Kriss Saldin Bottino."

Share Your Memory of
Elaine
Upload Your Memory View All Memories
Be the first to upload a memory!
Share A Memory
Plant a Tree