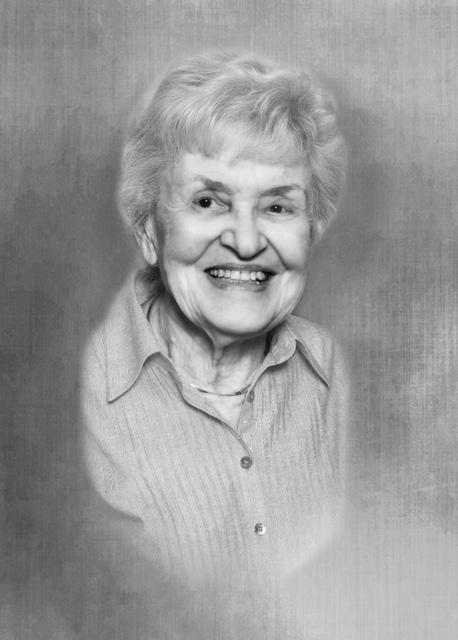 Doreen (*Bingham) Baumann - 1924-2015 Doreen Baumann (91), of Spokane, WA, died peacefully in her home on December 4, 2015. Doreen Bingham was born in San Francisco July 8th1924 to Annie and Thomas Charles Bingham. She was blessed to be an older sister and loved every minute of her relationship with her brother Bill. She became a member of Girl Scouts in 1934 in the Sigmund Grove Troop. Her family moved to Seattle where she graduated from Garfield High School and loved to swim in Lake Washington. After graduation she and a friend traveled and moved to New York for a year where she worked as a secretary. When she returned to Washington she worked at the Colgate Building in Seattle for the Deportation Office. In the summer of 1948 she was introduced to Dick Baumann through a dinner meeting set by their mothers. They were married February 12, 1949 upon which they made their home on the family farm outside of Washtucna, Washington. Doreen became active in the community where she was involved in Girl Scouts as a leader, Progressive Club, The Federated Women’s Club, and Round Table. She was a Sunday School Teacher in The Washtucna Community Church, and was a Washington State Queen of Flying Farmers. While on the farm she and Dick were blessed with four beautiful children: David, Ronald, John and Jill. They lived on the farm until 1973 when they moved to Walla Walla, Washington. In Walla Walla, Doreen continued to be active with Girl Scouts as a local board member. She took art classes at Whitman College and became a Docent with the Carnegie Art Center. She was an Elder at First Presbyterian Church and enjoyed her time with her book club. She played Tennis and learned Golf as well. Doreen became of member of P.E.O. chapter DX and was honored to serve as their President. Doreen and Dick held a special place in their hearts for Priest Lake, Idaho where they created many memories throughout their married years. They were fortunate to spend their retirement years traveling the world. Doreen most enjoyed their trip to Norway where she loved to see the many waterfalls. For the last 16 years of Doreen’s life she resided in Spokane, Washington. She involved herself in P.E.O. Chapter IT, and her local community Book Club. Doreen’s faith in God was primary in her life evidenced by her service as a Deacon for the Manito Presbyterian Church. Doreen was preceded in death by her son Ronald (2007), and husband Richard H. Baumann (2014). She is survived by David (Karen) Baumann of Washtucna, WA; (Susan) Baumann of Pasco, WA; John (Ellen) Baumann of Blaine, WA; and Jill (Rt. Rev John) Smylie of Casper, WY. She loved and rejoiced in all 9 of her grandchildren, their spouses and 9 great-grandchildren, as well as many nieces and nephews. A celebration of life will be held December 27, 2015 at 1:00 p.m. at Manito Presbyterian Church. 401 E. 30th Ave. Spokane, WA 99203 En lieu of flowers, a suggested donation to the Girl Scouts of America, or to a church or mission of your choice is the preference of the family. Condolences may be left at www.danekasfh.com
To plant a beautiful memorial tree in memory of Doreen Baumann, please visit our Tree Store
Sunday
27
December

Share Your Memory of
Doreen
Upload Your Memory View All Memories
Be the first to upload a memory!
Share A Memory
Plant a Tree