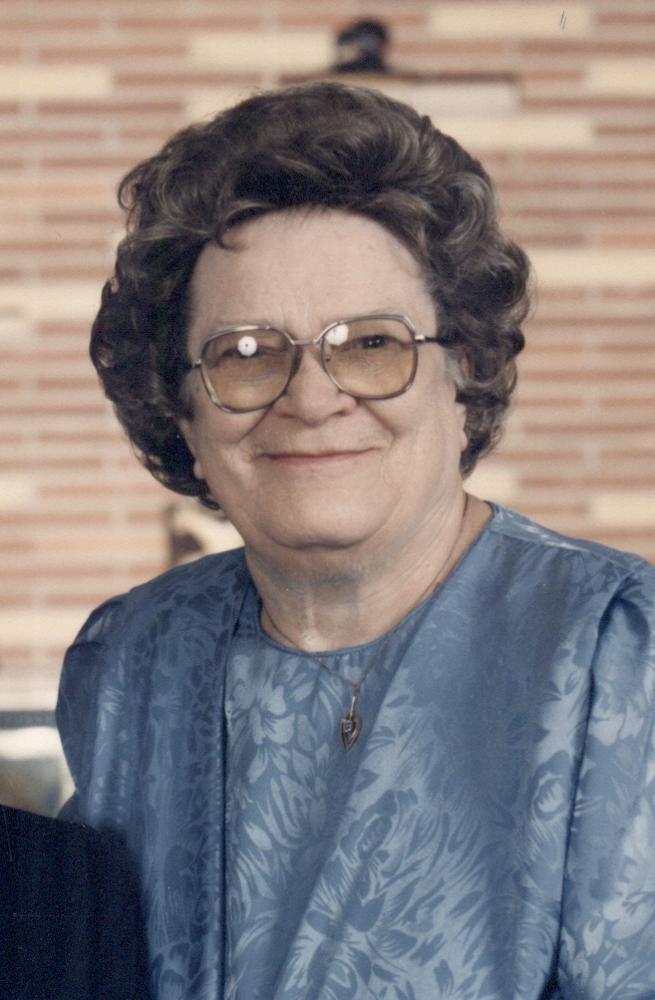 Minnie Christine (Lund) Franz, schoolteacher, homemaker and 72-year resident of Eastern Washington, died in Spokane on Sept. 12, two months short of her 100th birthday. Minnie was born Nov. 12, 1915, near Bonetraill, North Dakota, the third of six children of Jens and Bena Lund, immigrants from Denmark. In 1920, the Lunds purchased a dairy farm near Grenora, N.D. When Minnie began school in Grenora, she spoke only Danish, but when she graduated from high school in 1933, she was salutatorian. Minnie attended Minot (N.D.) State Teachers College for two years, receiving teaching certification in 1935. Minnie’s nine-year elementary school teaching career began in a one-room country school near Alkabo, N.D., and included four other towns in North Dakota and Montana. In 1943, Minnie moved to Lind, Wash., where she taught sixth grade for one year and met Robert Franz, whom she married on May 28, 1944. They raised four children and operated the family farm west of Lind, near Schrag, where they grew mostly wheat. In 2000, the couple moved to Spokane, and in 2004, Robert and Minnie celebrated 60 years of marriage. Minnie joined Menno Mennonite Church, near Ritzville, Wash., where she served as a Sunday school superintendent and teacher. She was secretary of the Pacific District of the Mennonite Church USA and edited the district newsletter. She was known for performing “readings” -- short stories which she memorized and presented as dramatic readings at church and school events. Minnie also served as an Adams County election official for the Schrag precinct for many years. Minnie enjoyed entertaining, often inviting friends and family to her home for dinners, parties, and family reunions. Holiday dinners in her home sometimes included more than 50 people. She loved throwing a good party -- from card parties to her legendary April Fools parties. Minnie and Robert also enjoyed traveling, visiting all 50 states, most of the Canadian provinces, Mexico and all the continents except Antarctica. Minnie was a lifelong sports fan, especially of the Washington State Cougars, the Seattle Mariners and the Lind Bulldogs. Her favorite sport was basketball which she played at Minot State. As a teacher, she coached basketball and other sports. Minnie was also an avid bowler. Surviving are two sons, Jay Franz of Spokane and Delwin Franz and partner Mark Falango of Titusville, N.J.; two daughters, Roberta and J.C. Hodgson and Carma Franz, of Spokane; three granddaughters, Alyssa and Doug Branca, Laura and Bryan Munro and Melina Franz-Falango; and one great-granddaughter, Geneva Munro. Minnie was preceded in death by her husband, Robert, in 2005; a sister, Eleanor Arnson Butterfield, and four brothers, Harry, Albert, Elmer and Alvin Lund. A celebration of Minnie’s life will be held on what would have been her 100th birthday -- Nov. 12 -- at 3:30 p.m. at Menno Mennonite Church with a dinner to follow. Inurnment will be in the Menno church cemetery in a private service. Danekas Funeral Home and Crematory, Ritzville, is in charge of arrangements. The family suggests memorial contributions may be made to Bethel College, North Newton, Kan.; Menno Mennonite Church for furnishings or equipment for its new addition; or the Washington Talking Book and Braille Library. Contributions may be sent in care of Menno Mennonite Church, 1378 N. Damon Road, Ritzville, Wash. 99169, for distribution to the designated organization.
To plant a beautiful memorial tree in memory of Minnie Franz, please visit our Tree Store
Thursday
12
November

Share Your Memory of
Minnie
Upload Your Memory View All Memories
Be the first to upload a memory!
Share A Memory
Plant a Tree