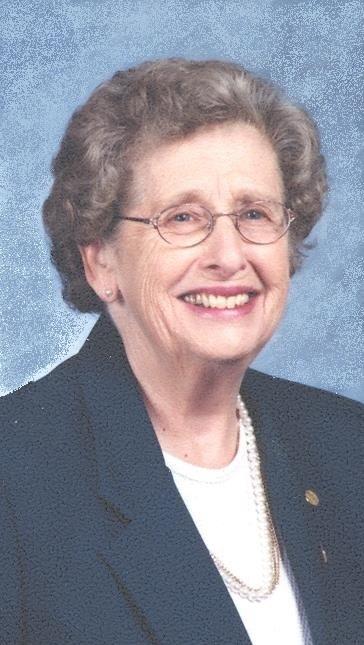 Elien M. (Foisy) Langford was born on December 17, 1922, in Prosser, Wa, the second daughter of Joseph and Milda Foisy. She entered the next life peacefully on September 20, 2104, after a brief period of declining health. Elien graduated from Prosser High School, Yakima Business College, obtained a private pilot's license and trained for the Women Airforce Service Pilots program. Her WASP training was cut short by her marriage to Phil A. Langford on May 27, 1944. Their marriage lasted for 64 years, until his death in 2008. Elien and Phil began their married life in Sunnyside, Wa, then settled in Ritzville in 1956, living in the same house for 53 years. Elien was a proud member of PEO and Trinity United Methodist Church, loved her bridge games and partners, and was a talented artist, seamstress and baker, known far and wide for her fabulous orange rolls. Elien was predeceased by her parents; husband Phil, and sister Lenore. She is survived by her children, Phil Jr. (Bev), Lynn Griffiths (John), and Fred (Rosemary), her sister JoAnn Read, 8 grandchildren, 16 great grandchildren, and several nieces and nephews. The family sincerely appreciates the care and assistance provided by Horizon Hospice, Gentiva and Orchard Crest Retirement Community. A memorial service will be held on Saturday, September 27, 2014, at the Trinity United Methodist Church in Ritzville at 3:30 PM. In lieu of flowers, memorial contributions may be made to Horizon Hospice, 123 W Cascade Way, Spokane, WA 99208. Online condolences may be left at www.Danekasfh.com
To plant a beautiful memorial tree in memory of Elien Langford, please visit our Tree Store
Saturday
27
September

Share Your Memory of
Elien
Upload Your Memory View All Memories
Be the first to upload a memory!
Share A Memory
Plant a Tree