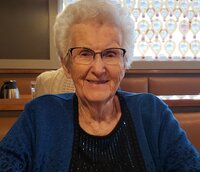 Deloris Allert (95) passed away after a brief illness on March 19, 2022. She was born on the family farm northwest of Ritzville on April 16, 1926, to Henry and Emma (Kiesz) Borgens, Jr. She graduated from Ritzville High School in 1944, then worked in Spokane where she met her husband, George Simonson. They were married in 1945 and moved to Aberdeen, Idaho, where they made their home for the next 25 years. Their daughter Karen Ann was born in 1946 and son Paul George was born in 1952. In 1970, Deloris and George moved back to Ritzville to operate the family farm. They moved into their Ritzville home in 1985. Deloris was never one to sit still. She was involved in numerous community organizations and loved to be around people. She had a passion for music and played the organ for church for 60 years. After her husband passed away, she later married Ralph Allert in 1987. She was a member of a group that entertained at various retirement homes and community events. She first played the keyboard and then graduated to playing her washboard, which delighted young and old. She moved to Spokane to a retirement community in March of 2020 and enjoyed being involved in the activities offered there. Her favorites were Wii bowling and playing pinochle with friends. She aspired to live to 100 years of age because, “I have so much I want to do and see!” Deloris is survived by her daughter Karen Greenwalt of Richland, daughter-in-law Carol Simonson of Ritzville, sisters Eleanor Lloyd of Beavercreek, OH, Joan Dicus of Walla Walla, and numerous grandchildren, great-grandchildren and great-great grandchildren. She was preceded in death by her parents, husband George Simonson, husband Ralph Allert, brother Wallace Borgens, and son Paul Simonson. Deloris had a zest and enthusiasm for life that she shared with all those who knew her. She will be missed by many. Memorial contributions to honor Deloris can be sent to: Ralston Grange #943, PO Box 332, Lind, WA 99341