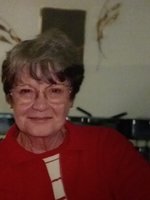 Sally Ann Jardee passed away peacefully on June 14, 2020 at 84yrs of age. This would have been her 62nd wedding anniversary. Sally was born July 5, 1935 to William and Viola Jennings in Burns, Oregon. She married James Jardee on June 14,1958. Together they had 5 children, Joe, Jeff, Theresa, Mary and Bill. Sally attended University of Portland earning a Bachelor’s degree in nursing. She was a longtime nurse working in Lind and Ritzville, she finished her career as the head nurse at Life Care Center in Ritzville. Sally had a Zest for life with a great wittiness to make others laugh. Before here husbands passing, they loved to travel, often visiting the Oregon coast. Sally was very involved with Saint Agnes church while she was in Ritzville often preparing dozens of pies for the sale at the annual county fair. She was also dedicated to her family and friends. She is proceeded in death by her parents William and Viola Jennings, Husband James Jardee, and daughter Theresa Jardee Sally leave behind here brother William Jennings, four children, Joe, Jeff, Mary (Alan) Locke, Bill (Nita) Jardee, Grandchildren Lucas, Cindy, Timothy, Katie, Ellen, Brian, Brandi, James, Thomas, Luke and Jessa, and six great grandchildren. There will be a Rosary at 5:00 PM Friday June 19, and a funeral mass at 11:00 AM Saturday June 20th